Depression is the most common illness among those who die from suicide, with approximately 50% suffering from this condition.

Even the sufferers of depression will find it hard to explain what it means to be depressed. It’s akin to having an invisible and omnipresent entity in your head that controls your feelings, your thoughts and your actions. Clinical depression, a far uglier form of it, leaves you perennially stuck in a self-reinforcing spiral of negative thoughts - a loop that you can’t break out of for weeks or months together. It is a mental disorder that’s exhausting to fight.

You can manage depression in a lot of ways - medication, therapy, techniques like meditation etc... but in this article we’ll just focus on the nutritional aspect of it. Latest research shows a well established link between Vitamin D and depression. We now finally have a much better understanding of how this vital nutrient helps regulate our gene expression and the functioning of neurotransmitters in our brain.

Commonly called the ‘sunshine vitamin’, Vitamin D is an essential nutrient for the overall health of the body. The most pivotal role of vitamin D in the body is in homeostasis (maintaining an equilibrium and promoting healthy growth) of calcium and skeletal growth. However, vitamin D is not a simple micronutrient that is just ingested and digested. It is an amazing nutrient that has a wide range of not only physiological but genetic effects on the body. Vitamin D is thought to regulate anywhere from 0.5% to 5% of our gene expression. That's over 1000 genes and 1/24th of the human genome. 70% of the people worldwide do not get adequate amounts of Vitamin D. A deficiency results in increased DNA damage and acceleration of telomere shortening - equivalent to 5 years of biological ageing.

The primary source of vitamin D is the sun and about 90% of the amount we require is obtained by exposure to sunlight. The UV light from the sun is absorbed by a specific compound in the skin that is converted into an inactive form called vitamin D3. The biologically active form of vitamin D called calcitriol (1,25-dihydroxyvitamin D3 (1,25(OH)2D3)) , is produced in the kidneys.

Vitamin D is now widely recognized as a neuro-steroid hormone that plays a vital role in the development and functions of brain cells and deficiency of vitamin D can lead to unwanted changes in the brain. Recent research suggests that vitamin D plays an important role in the functioning of neurotransmitters - glutamine, noradrenaline, serotonin and dopamine.

Serotonin and dopamine, are both key regulators of our mood, thoughts and mental state. Dopamine promotes motivation and is involved in the feeling of reward and achievement. While, serotonin is termed as the happy chemical and its production promotes happiness, and wellbeing. Both of these chemicals are crucial for mental health and decrease in the production of these neurotransmitters can increase the risk of depression.

Serum vitamin D3 levels influence the dopamine pathway in the brain. And abnormalities in the levels of vitamin D have been linked with various neurodegenerative diseases, such as Parkinson’s disease and depression.

The seasonal affective disorder (SAD) is characterized by low mood and depression caused by seasonal changes. If you suffer from SAD, you’re likely to experience anxiety and feelings of sadness in winter months, along with symptoms of lethargy, eating disorders, and changes in sleeping patterns.

The primary reason behind it is the decreased level of serotonin in the body. This happy chemical is produced in the brain as a result of increased vitamin D3 levels in the body. Winter months reduces your exposure to sunlight, which means lower levels of vitamin D3 and this in turn can lead to you developing SAD. Increase in the intake level of vitamin D3 has been proven to improve the symptoms of SAD in many patients.

In the US for example, Vitamin D deficiency (VDD) and insufficiency (VDI) were found to be 28.9% and 41.4 % respectively. Everyone’s Vitamin D requirements are unique and this makes it incredibly hard to maintain the right amount of this vital nutrient in your body. Once you upload your data on Gini, you should be able to access free reports on Vitamin D that tells you what your gene adjusted targets should be based on your nutritional absorption risks on the CYP2R1 (rs10741657) and GC (rs2282679) - both of these genes demonstrates a significant association related to vitamin D status.

Ensuring that you get the right amount of Vitamin D is just one aspect of maintaining optimal mental health. Conditions like depression are also influenced by folate intake - because folate works to maintain a healthy gene expression. The other nutrients that matter to brain function are fatty acids like Omega 3 and Omega 6. Depending on the type of diet you follow, how well you convert some of the Omega 3 fatty acids might also play a big role. ALA is an Omega 3 fatty acid you get only from food sources (your body cannot make it) and this gets converted to EPA and DHA - two nutrients crucial for healthy brain function. If your ALA to EPA/DHA conversion efficiency is lower and if you’re also a vegan this might mean going heavier on natural sources of ALA like seaweed, algae or chia seeds. Gini gives you a way to figure out all of these different personalized nutritional risks and also to see what foods are high in Omega3 fatty acids and the Omega 3 to Omega 6 ratios risk on top of all the other nutrigenetic risks you carry. 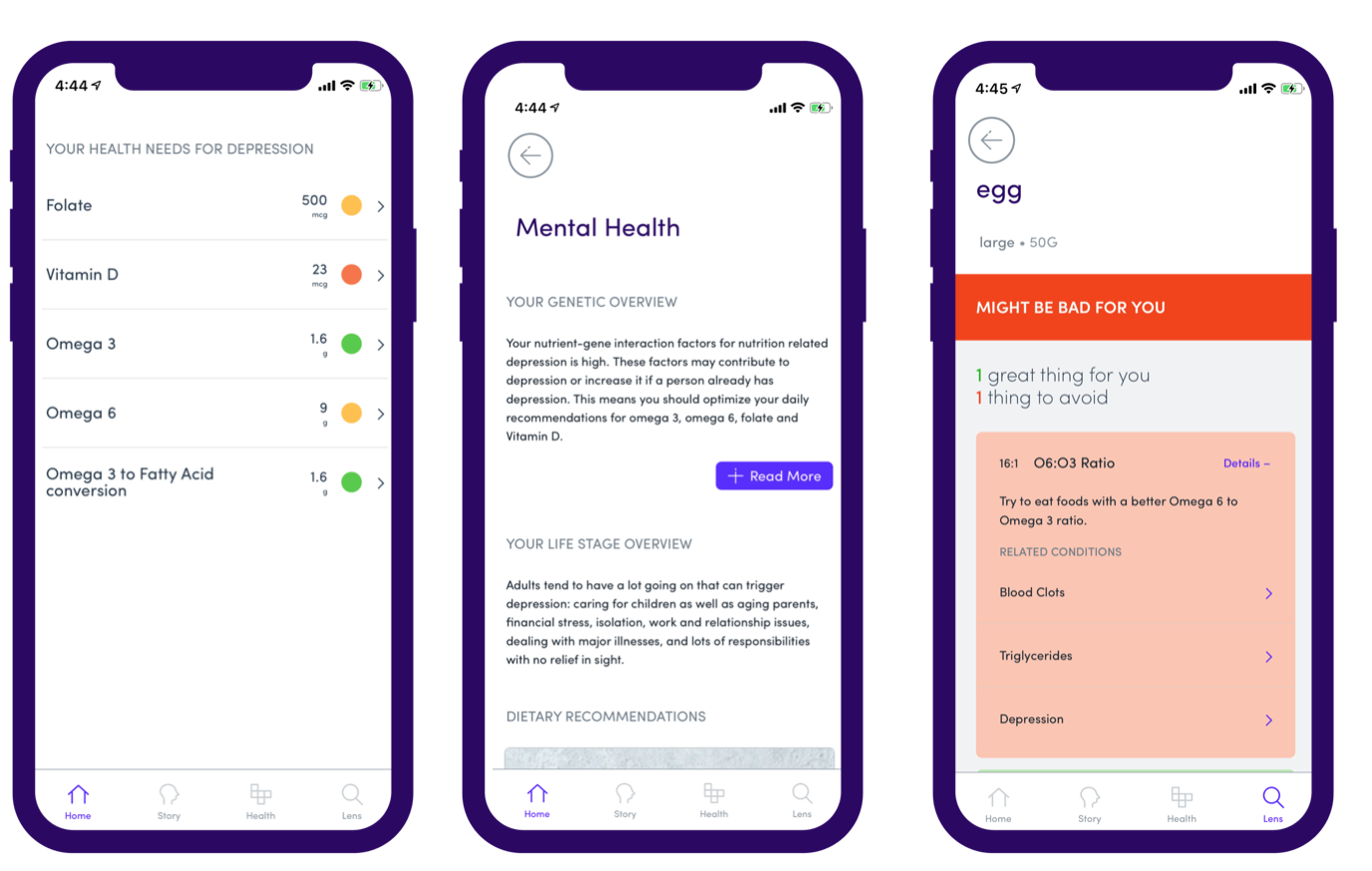 Did you find the article helpful? Click here to take a short survey on depression.

How much iron in your diet is too much? Excessive iron is toxic to the cells and the body. Depending on mutations in the HFE gene you're likely to be at an iron overload risk.

Find out how fats (especially Omega-3 fatty acids), antioxidants and B-vitamins can potentially help stave off Alzheimer's and cognitive decline.