Do you always feel hungry? You can blame your ghrelin levels for that – a hormone that acts as a meal-initiating signal!

Gut hormones like ghrelin are released from the gastrointestinal tract in response to nutrient ingestion, and regulates your appetite and body weight. It plays an important role in generating signals that control the intake of our food, deposition of fat in the body and the release of growth hormones.

Ghrelin regulates the level of glucose in the body by inhibiting the production of insulin and by mediating a balance between glycogenolysis (the breakdown of glycogen to release glucose) and the opposite - gluconeogenesis (the formation of glycogen from glucose). Ghrelin also functions to mediate the health of bones, muscles and nerves. In this way, the key regulator of our appetite has a diverse role in the body.

Your Ghrelin levels are unique

Your appetite comes from your genes and it varies from person to person!

Various studies show that different genotypes of FTO gene (fat mass and obesity-related protein) can regulate the sensations of satiety and hunger. It modulates the release of hormones and leads to varied appetites in different individuals.

Evidence suggests that SNPs in the FTO gene can cause increased energy intake and higher BMI. In studies, those carrying the obesity risk A allele of rs9939609 exhibited overall increased food intake, fat consumption and impaired satiety.

It’s been hypothesized that FTO rs9939609, as seen with the AA genotype, impacts circulating acyl-ghrelin levels. This increases energy intake and drives the need for energy dense foods and increased food-cue responsivity behavior.

There are various factors that govern the level of ghrelin in the body.

Fasting is the most important regulator of ghrelin. Decreased glucose levels and fasting lead to an increase in the levels of ghrelin in the blood.

Ghrelin production is terminated after a meal. Primarily, due to the action of low pH of gastric acid which produce increased amount of desacyl ghrelin, which act as antagonistic of acylated ghrelin (the active form of the hormone).

Essentially, the as your gastric acid production increases, your hunger hormone production decreases!

A marked decrease in ghrelin is associated with the opposite of binge-eating disorder, called anorexia nervosa. It is characterized by an eating disorder that lead to abnormal reduction in weight due to severe loss of appetite. The role of ghrelin in promoting hunger suggests a potential role of this hormone in the treatment of anorexia nervosa.

Another hormone that is linked to our appetite is leptin – the satiety hormone. Ghrelin and leptin are both hormones regulated genetically by the FTO gene.

Leptin ensures that the amount of food we intake is kept under check. It sends the signal of being full, from the stomach to the brain. High levels of leptin tells your brain that you have plenty of fat stored. Thus it too plays an important role in the regulation of body weight and helps the body loss weight by reducing our appetite.

Leptin levels are increased when the cellular energy levels are high, and when we eat food. In line with the ghrelin production, the FTO risk allele was found to be associated with lower serum levels of the satiety-enhancing leptin.

You can find out your risk on the FTO gene via Gini. It's one of the factors we take into consideration when we recommend actions you can take in terms of your weight gain risk. 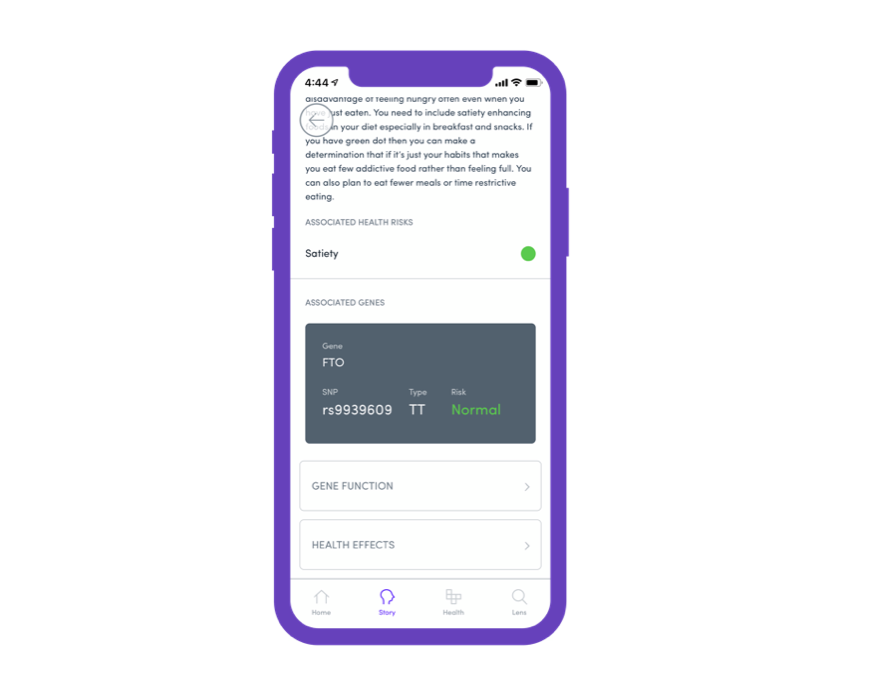 Find out if you need to target organic sources of vegetables based on your genetic detox risk.

Chromosomes are protected by telomeres. As you age, your telomeres shorten - but this can be exacerbated by oxidative stress and inflammation.