The Human Brain and the History of Mental Illness

If you were to compare humans to just about any other species, you would find it is the development of our brain and cognitive abilities that truly sets us apart. This is what has enabled our continued growth and evolution. It's what allows us to forever be problem solving and advancing. And it is what has helped us to move to the top of the food chain.

Our brains are the result of two million years of human neural network growth aligned with a sudden genetic mutation that happened some 70,000 years ago, leading to cognitive evolution. That triggered the development of language and communication, which helped us to function in large scale in order to build systems, institutions and nations. [1]

But even with all this evolution, our brains remain susceptible to tiny fluctuations that can cause everything else to go awry. It is this susceptibility that has caused mental illnesses to become some of the most common ailments afflicting mankind today, especially in the developed world.

Throughout history, there has been a heavy stigma surrounding mental illness. There was a time when these illnesses were viewed as a form of demonic possession, and those afflicted were subjected to bloodletting, torture and isolation. [2]

Over time, researchers and physicians have begun to think about these illnesses as being conditions resulting from abnormal or irregular biology. Now we understand the many components that might contribute to mental illness, to include genetics, infections, brain defects or injuries, substance abuse and damage before birth. This understanding has helped to reduce the stigma, but not to eliminate it completely. [2]

Evolution and History of Mental Illness

The first evidence of mental disorders dates back to 2000 BC, when Ancient Mesopotamians associated mental illness and demonic possession, namely believing that the former masked the latter. This was followed by Ancient Egyptians, Indians and Persians describing mental illness for the first time.

Around 600 BC, the theory of imbalanced body fluids causing strain on mental health arose, first described by Hippocrates. This theory continued on through the Middle Ages. [3]

Fast forward to 500-1400 AC, and the common belief in Europe was that mentally ill individuals were no better than animals. This was then followed by a period of time during which Europeans thought of mental illness as a choice. [3] Between 1939 and 1945 a few countries saw the darkest period of sterilization and euthanasia programs among the mentally ill.

Psychoactive drugs were discovered in the 1950s and that started the beginning of Psychopharmacology. SSI antidepressant drugs were introduced in the 1990s, quickly becoming the most prescribed drugs globally.

Everything we do, think and feel is governed by how our brain cells, or neurons, connect to one another. What most people think of as psychological makeup is rooted in the biology of these connections. Likewise, our thoughts, behavior and environment reflect back on our neurons, influencing the pattern of connection.

Far from being hardwired, as scientists once envisioned it, the brain is constantly being rewired.That means we have the ability to influence these connections and wiring.

The evolution of mental illness has seen much progress. This is in part due to biomedical advancements as well as our understanding of the biological underpinnings of mental disorders. There is no witchcraft or possession - it's simply science and biology causing cells to fire differently for one reason or another. And these differently firing neurons manifest themselves as mental disorders.

Still, in many regions of the world mental illness continues to be feared and viewed with stigma.

In this Genetics and Mental Health series, we'll explore the evolution of the brain in terms of its size development, as well as the role our brain development has played in human culture, diet and evolution and the history and timeline of mental illnesses. We will discuss the roles of genetics, environment, biology, nutrition and exercise. And we will soon dive deeper into the various mental health disorders afflicting mankind today.

Looking to the Future

If you have already conducted genetic testing, or you are interested in finding out more about brain health and how it applies to you, please send me an email to [email protected] or ask for an invitation at https://ginihealth.com/. We are on a mission to make nutrition personalized for everybody, with a goal of increasing both health spans and lifespans. 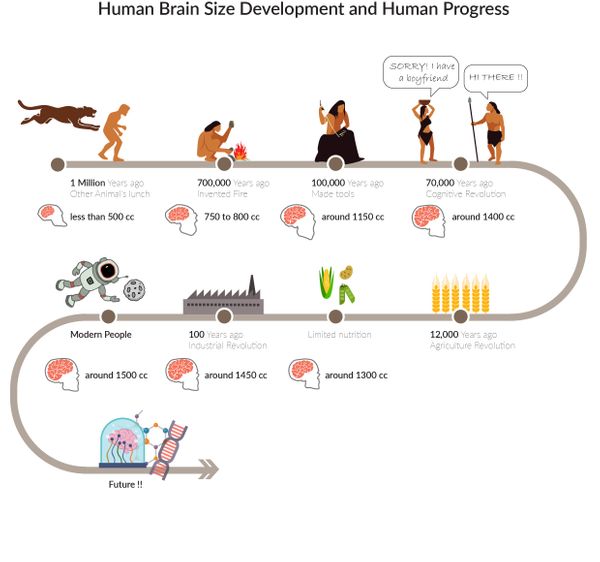 Cooking enabled our ancestors to eat a variety of foods, regardless of having shorter intestines and smaller teeth. Some scientists believe that human evolution optimized for larger brains instead of long intestines to control the energy requirements' consumption. 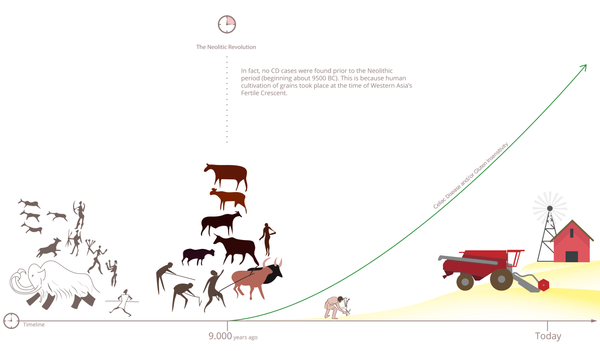 While gluten has been a large component of our lives and diets today, it has not been the case for very long. Wheat was domesticated only about 10,000 years ago or so. As widespread as it may be, wheat cannot be tolerated by everyone.